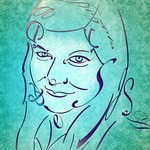 Ms. Dozois is the ERHS Graphics Lab teacher and instructional designer. She earned her BA in Art (Drawing and Printmaking) from UC Santa Cruz where she graduated with Phi Beta Kappa honors. She earned her MFA from the USC film school in Animation and Digital media. At USC, she graduated with Phi Kappa Phi honors. Ms. Dozois worked in the media and technology industry before becoming a teacher. While in industry she worked in virtual reality and interactive media as a designer and animator at the Institute for Creative Technologies at USC. She was on the team that helped create technology for blockbuster films including Spider Man and Avatar. She began teaching in 2007 and works to bridge the gap between art and technology in her own work and with her students.